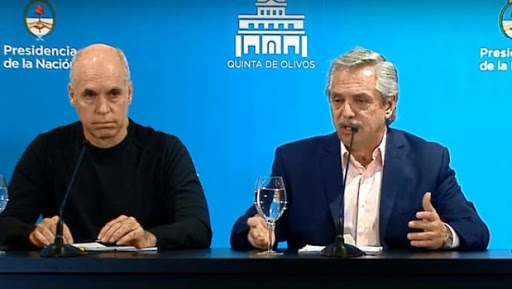 At last! Someone who says out loudly what many of us think! Buenos Aires City Mayor Horacio Rodríguez Larreta has had the guts to react to the measures taken overnight by President Alberto Fernández, who even went against what some of his Ministers had promised a few hours earlier. No one was consulted. I wonder who whispers in the President’s ears what he has to say and do, who writes his scripts and speeches. Not difficult to guess, though.  We all know.

We are running out of vaccines, that’s the naked truth. Visiting the Pope (Guzmán) or “crossing fingers”(Gollan),  don’t sound very scientific procedures, do they? Alberto Fernández’ administration is a mixture of stand-up and improv dark comedy, but not entertaining or funny at all. He doesn’t seem to reread his speeches before he broadcasts them. If not, he wouldn’t have despised the Health Stuff the way he did, speaking of “a certain relaxation” of the system. No wonder doctors and nurses reacted with anger and indignation. Absolutely false and unfair. Then he tried to apologize, but too late. He’s always blaming others. This time, kids and their parents for the increasing COVID -19 infection rates. Schools closed once again, in spite of the fact that we’ve all checked how badly that has affected students from a psychological and academic point of view. Back and forth, all the time. Our President seems to be isolated, absent, disturbed, deranged,  at a loss, and we certainly are, as a society. Left in the lurch. Uncertainty rules, not him, nor her.